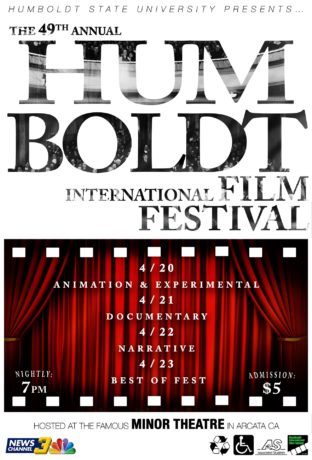 Started in 1967, the students of Humboldt State University have been inviting filmmakers to enter their film shorts into their festival. Hosted by the Associated Students of HSU, this is the world’s oldest student run film festival. Students judge the entries from September through March. The finalists then show for three evenings for guest industry judges and local audience. The four night event features outstanding independent short fils from around the world in four film categories:

This festival promotes the art of film, not only as a means of entertainment, but also as a vehicle for self-expression and a stimulus for dialogue about social, political and cultural issues.